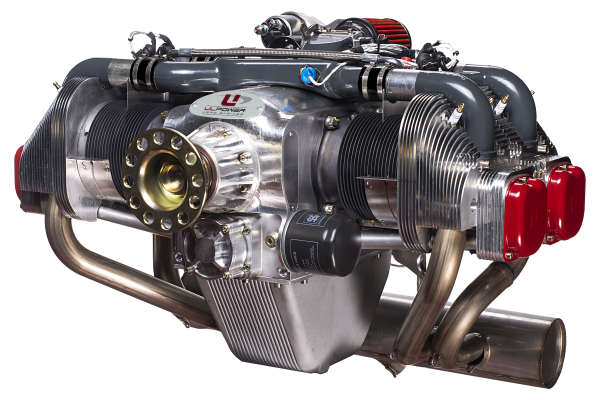 Before we give you the answer to that , lets take a look at a simplified explanation of the functions of the alternator / regulator / battery / capacitor .

The alternator / generator produces 3 phase AC electricity.
The regulator/rectifier converts the 3phase AC into a unstable DC between 12 and 15.5 V. The battery buffers this unstable DC output and converts it into a stable DC output. It is very important to never disconnect the regulator from the battery when the engine is running. Doing so would destroy the regulator. (If there is no communication between battery and regulator, that would mean that the regulator keeps working which can result in overheating ). When the maximum voltage is reached, the rectifier/regulator will stop feeding DC into the battery. Depending on the type of battery, the rectifier will shut down the DC output to the battery when the voltage level is between 14 and 15.5 V.

So what if  my battery fails in flight ?
From an engine point of view, the battery is considered as a buffer for DC. Once the engine is started, we no longer need the battery (again, from an engine point of view) as long as the alternator / regulator continues to provide the necessary power to the ECU.
The ECU however needs a stable DC output . If the battery dies, or there is an open contact inside, the buffering characteristics from the battery perish . To avoid that the regulator is in direct contact with the ECU, and thus supplying unstable electricity, we strongly recommend to install a genuine ULP capacitor (this capacitor is able to cover for the big amount of amps coming from the alternator/regulator) parallel on the battery.
So if the battery fails in flight, but the alternator is still ok (and preferably you have installed a capacitor) , you will be able to fly for as long as necessary.

So what if my alternator fails in flight ?
To answer this question we performed a test with the ULPower engine on the dyno and its’ alternator not connected to the battery. Before starting the small 18Ah battery used in the test aircraft was fully charged.

The ULPower engine was started using the powerful starter motor on the dyno, but the current needed to start was drawn from the small 18Ah aircraft battery. Ambient air temperature, and oil temperature was +/- 20°C (68°F) at start-up.

The engine was warmed up for a short interval at 1.500 rpm and then the throttle was set to a constant 2.600 rpm. The dyno loading resulted in +/- 50 hp being produced – a typical cruising power setting for many kit build aircraft. All the electrical current needed to operate the engine; the ECU, dual electronic ignition and 8 spark plugs, 4 electronic fuel injectors, the electric fuel pump, and digital combined engine instrument was drawn from the aircraft battery, which was not being recharged.

The engine ran continuously without the slightest problem for more than one hour! You can see in the above graph that the battery voltage (dark blue line) dropped almost linearly from 12 volts to a point where the battery capacity registered a little more than 10 volts. Past this point, this battery’s voltage dropped very quickly and the engine began to malfunction due to insufficient fuel pressure and insufficient voltage for the electronic components. The engine was shut down after starting and operating for 1 hour and 10 minutes solely on the small battery’s power.

This would mean that if a pilot had a similar capacity battery in good condition on board, and immediately noticed that the alternator and/or the regulator/rectifier ceased to supply a charging current, he/she would still have approximately one hour of normal engine operation to find a suitable place to land. Other onboard electrical consumers have not been taken into account as normally they would be switched off, or used sparingly to conserve power. Evidently the larger capacity battery you have on board, the greater your safety margin will be.